In Dinosaur Simulator, DNA acts as the game’s currency. It is used to buy new dinosaurs, to buy dinosaur skins, and to open eggs in the game.

The player earns DNA when they become a Juvenile and, Adult. This amount of DNA is varied depending on the growth rate of the dinosaur. Dinosaurs with a 1x Growth Rate Multiplier receive DNA Icon

40, while ones with 2x GRM ( Growth Rate Multiplier ) receives 80 and so on. When the player grows into an adult, they receive DNA Icon

80 which varies depending on the Growth Rate Multiplier once again. Dinosaurs with a 1x GRM receive DNA Icon

80 while those with a 2x GRM receive DNA Icon

160. The amount of DNA earned in one day is stopped at Day 25 and is also affected by the Growth Rate Multiplier. Dinosaurs with a 1x GRM earn DNA Icon

25, while those with a 2x GRM receive DNA Icon

The Barosaurus has the highest GRM in the game of 3, which is why it's a top choice for DNA farming for terrestrial creatures while Shastasaurus is the best for underwater farming with a growth rate of 1.8 and 1200 Oxygen bar. The Barosaurus can be purchased for DNA Icon

3,000 while the Shastasaurus can be purchased for DNA Icon

Alternatively, the player may also buy DNA from the DNA Store, although because of the high price for DNA, it is recommended to NOT purchase DNA from the store.

Another way to get DNA is to buy a Party Box, which lets any/all players get DNA. Press the P key on the keyboard to call a Robux purchase prompt for Robux

40. When bought, a countdown shows up on the party box which opens to make DNA rain down from the sky when the countdown gets to 0. Do note that the player who bought the Party Box is unable to collect the DNA, meaning if the player intended to purchase it for themselves, it’s useless to them. The party box isn't working for now.

There is also a Daily Login bonus giving DNA Icon

100 every 12 hours. This can give you an additional DNA Icon

200 a day for free, so it is highly suggested you do this whenever possible. This can be accessed from the Main Menu in the DNA Store. 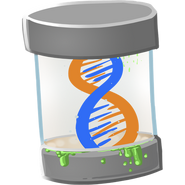