The Classification of Hybrid Dinosaurs is any Dinosaur that was not a thing of nature but rather a combination of multiple creatures put together into a single beast, hence the term. They are created by alleged Scientists, despite them not existing in the game. These "Dinos" don't exist in real life, hence their amazing abilities and statistics.

As of now, only three official hybrids exist in the game so far, with the Avinychus being the most recent edition in the category (although some skins may also technically be considered hybrids, depending on the skin. For example, the Grizzly Spinosaurus is a hybrid of the Spinosaurus and the Grizzly Bear but it is not considered its own independent species as they are still just skins and not separate dinosaurs. Also, the Violex Fillius is considered a hybrid, along with it's Devasaur relative. However, since these are skins and not official Dinosaurs, they are not hybrids.)

In order of when they were added to Dinosaur Simulator. 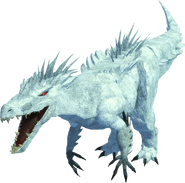 The Albino Terror, the original of the three hybrids, well respected and feared.

The default Megavore, a dinosaur infamous for being a creature that can easily KOS and is often feared and attacked if spotted.

Avinychus, the newest hybrid of Dinosaur Simulator, it also is the first hybrid that was not originally a skin of something else.
Community content is available under CC-BY-SA unless otherwise noted.
Advertisement